When dispatching an object onto the queue, behind the scenes Laravel is recursively serializing the object and all of its properties into a string representation that is then written to the queue. There it awaits a queue worker to retrieve it from the queue and unserialize it back into a PHP object (Phew!).

When complicated objects are serialized, their string representations can be atrociously long, taking up unnecessary resources both on the queue and application servers.

Because of this, Laravel offers a trait called SerializesModels which, when added to an object, finds any properties of type Model or Eloquent\Collection during serialization and replaces them with a plain-old-PHP-object (POPO) known as a ModelIdentifier. These identifier objects represent the original properties Model type and ID, or IDs in the case of an Eloquent\Collection, with a much smaller string representation when serialized. When these objects are unserialized, the ModelIdentifiers are then replaced with the Model or Eloquent\Collection of Models that they temporarily represented.

ℹ️ Curious to know how the SerializesModels trait is «replacing» these properties at runtime? Before jumping into the source code, you may want to read the PHP docs for a quick primer on what the reflection API offers.

Because of the SerializesModels trait that the job is using, Eloquent models and their loaded relationships will be gracefully serialized and unserialized when the job is processing.

While this quote from the docs sounds promising, it can be misleading. Here is an example of how a Model would be represented when serialized.

As you can see, the relation is serialized as records, which is the name of a one-to-many relation between User and Record as it exists on the User model. However, even though we’re only selecting the id and user_id columns and have a limit of 3 records to be returned with the User model, there’s no mention of which records, which properties, or how many in the serialized representation.

Wow! We’re selecting all Record models, in their entirety, associated to the User! As you can probably imagine, this can cause unforeseen issues for the unexpecting artisan.

Hope is not lost! There are workarounds without having to sacrifice resources on the queue, application, or database servers.

If you don’t need the loaded relations to be re-loaded, you can simply call withoutRelations() on your Model before it’s serialized.

As you can see, there are no longer any relations that will be loaded when the User model is unserialized.

Make necessary relations their own property

If the loaded relation is going to be required after the Model is unserialized you can store the relation (which is an Eloquent\Collection) as its own property on the object being serialized. 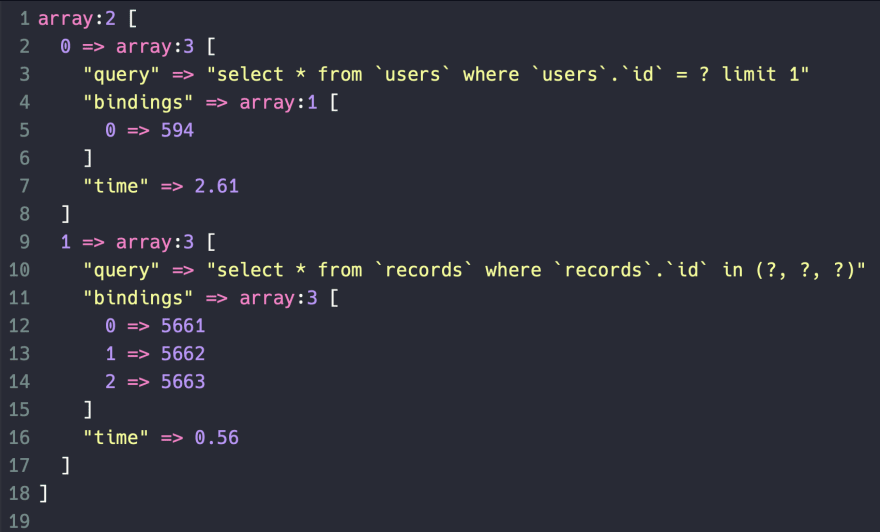 As you can see, the serialized representation of the Eloquent\Collection specifies what the Model type is and which IDs need to be retrieved from the database.

Much better! Now that our Model and Eloquent\Collection of Records have been hydrated, we can even set the relation back on the Model by using the setRelation method.

While it’s recommended to use the SerializesModels trait on any and all objects that will be queued (or otherwise serialized) it is crucial to be at least aware of its potential pitfalls and shortcomings as well as how to avoid running into them, if not understand how it all works under the hood.

In this blogpost I’m going to explain how to keep your code clean using decorators. By applying decorators the open close principle is maintained, code becomes easier to extend and easier to adjust. Background According Read more