When developing the project, we prefer using messengers to simplify communication between team members. Which one do we use on a daily basis? This is Telegram which is considered to be the safest and most user-friendly messenger. It’s private enough, as all messages are encrypted, and compatible with all platforms. Besides, there’s a flexible API for creating bots that factored our decision to choose Telegram.

In fact, the most projects we deal with are connected with Magento 2. Since the Magento platform has its specific features, our process has the following logic:

As you can see, we generally use Atlassian software, but Hipchat developed by the same company seems a mediocre technology (not only we are of this opinion, as Atlassian suggests buying its new product Stride), that’s why we decided not to apply it. Moreover, a new idea about deployment status notification comes to us. Every time when the deployment status is changed (“start of deployment”, “in progress”, “successfully completed”, “failed”), team members are notified of it via Telegram. 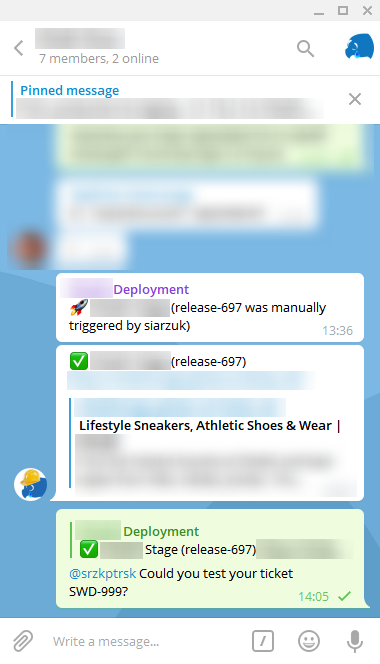 Actually, on GitHub, there’s a project under the scope of which a bot sending notification is developed. But the drawback is that it works for Bamboo – build. After reviewing documents, we added a phrase about deployment which hasn’t been used before (TelegramNotificationTransport.java). In order to comply the plugin, you need to install JDK and Atlassian SDK. If there are some issues when installing, one can use the step-by-step guide on README.MD.

All in all, the idea has been implemented successfully and now works properly.